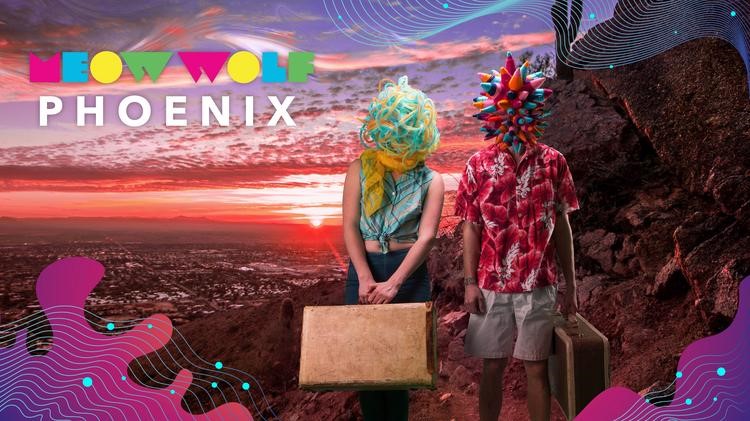 Meow Wolf, an interactive, immersive art experience, is planning to open an exhibition, event space and hotel in the Roosevelt Row Arts District.

After visiting Meow Wolf and experiencing the exhibit, True North Studio Principal Developer Jonathon Vento said he knew he had to find a way to bring it to Phoenix.

“As a 55-year-old guy who has traveled the world, I thought I had seen about everything,” he said. “But this shook me to my core. It made me want to be a better businessperson, a better person. It is indescribable. It has been a pursuit on my part to introduce Phoenix to Meow Wolf.”

Vento, the project developer whose studio is based on Roosevelt Row, said Phoenix’s art scene resonates perfectly with what Meow Wolf is all about.

“When I left Meow Wolf, I sat in my car in the parking lot, dumbfounded,” he said. “I called until I found out who the CEO was, and his cell phone. I called and left him a message and said, ‘Hi, I’m Jonathon, you don’t know me, but we are going to be best friends.’”

From a business perspective, an expansion to Phoenix made perfect sense for Meow Wolf. The company started looking at Phoenix about two years ago, but the project didn’t gain much traction at the time, Vince Kadlubek, Meow Wolf co-founder and CEO, told the Business Journal.

“A lot of our guests in Santa Fe come from the Phoenix market,” said Kadlubek. “It’s one of our top three markets, so from a business perspective it makes sense.”

Meow Wolf’s Phoenix location, which will be built at 811-817 N. Third St., will include a 75,000 square-foot exhibition area complete with a 10,000-square-foot music and performance venue.

The Phoenix location also will be Meow Wolf’s first to include a hotel, which will be approximately 400 rooms designed by local artists that explore all forms of overnight experiences, including faux-glamping, capsule rooms, communal hostel environments, absurd luxury suites, as well as lodging inside the art exhibition itself.

Cost estimates for the project are not available as those involved say it is too early. True North bought the property that will house Meow Wolf’s project for $2.15 million last month.

The Santa Fe exhibit, which is the only Meow Wolf location open and functioning, is called the “House of Eternal Return,” and the first space visitors encounter is a house with bedrooms. Kadlubek said the company received many requests from guests to be able to stay the night in the house, but turned them down because the exhibition was not designed for overnight stays.

“That got us thinking, how cool would it be for parts of the exhibit to be for overnight-stay opportunities?” Kadlubek said.

While it will be a “years-long” process before the Phoenix location opens, Kadlubek said he envisions going around the state to engage with local creative communities to showcase local art at the installation.

“Much of the project will be driven by and designed by locals,” he said, adding there have not been any details finalized about how the project will look or what visitors should expect of the Phoenix location.

“This tells a story and puts people inside of incredible, beautiful spaces that are family-friendly, imaginative, incredible environments to play, take pictures, hang out and explore,” Kadlubek said.

Phoenix is Meow Wolf’s fifth permanent location to be announced. In addition to the first location operating in Santa Fe, the company has locations under construction in Las Vegas and Denver, and recently announced plans to build a permanent location in Washington, D.C.

The Meow Wolf project is the latest in a flurry of activity for True North Studio in downtown Phoenix: