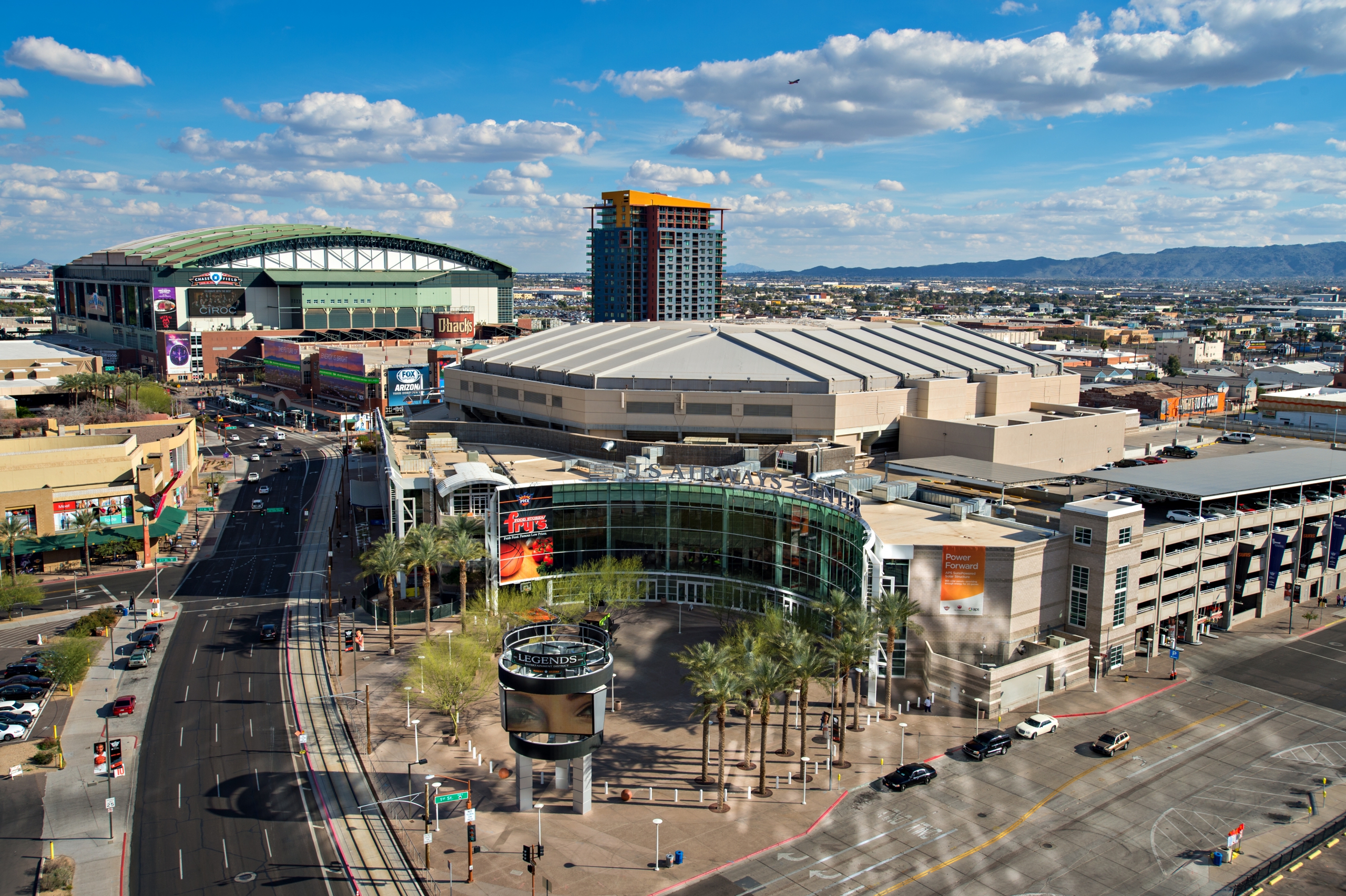 PHOENIX USED TO BE AMERICA’S CANCUN. You’d fly in and check into a resort, where you’d presumably spend the next three days sipping 1,000-calorie daiquiris poolside, along with a cohort of divorcees on Eat, Pray, Love-esque journeys. Maybe you’d venture into Scottsdale once for tacos, but you wouldn’t actually bother to explore America’s fifth-largest city, at all.

It’s not your fault. For most folks, Phoenix boils down to one thing: an endless mass of desert sprawl and 110-degree shadeless pavement.

“Phoenix is great if you like dry, hot dust, and chains,” a local friend once told me. “If you’re not into that, though, it sucks.”

As with plenty of America’s most-maligned cities, the majority of knocks against Phoenix come from folks who blacklisted the place after a long weekend in 2009, or during a poorly orchestrated spring break trip. But the place has come a long way in a short time. It deserves a second chance.

Venture past your connecting gate at Sky Harbor and you’ll find a full-fledged downtown, complete with big-name restaurants, live music venues, a protected arts district, and one of the best cocktail bars in the world. You’ll find mountains ripe for hiking, just opposite rivers, ideal for floating lazily along, cold beer in hand. And you’ll find an excitable cadre of locals who have worked hard to drag their hometown squarely onto America’s A-list.

On a recent Friday, I sat on the sprawling patio at Angel’s Trumpet Alehouse in downtown Phoenix. The heat index fell somewhere in the upper 90s, dry and almost pleasant under an awning. Owner Mat Englehorn barely broke a sweat as he popped open two beers for us.

“This used to be a small, small town,” said the native Phoenician, sipping his porter and watching a construction crane swing just beyond the outer fence of his biergarten. “But Arizona State came in and changed downtown. There are people who still won’t come down here because they remember how, 10 years ago, they rolled up at 5pm and everyone left. But in the last five years, there’s been a boom. Now, watch. At 5pm, this place is gonna be packed.”

He’s referring to the 2006 opening of Arizona State’s downtown campus, which brought with it a cohort of college students and young professionals — none of whom leave the bar at 5pm. In the dozen years since the school moved in, the surrounding smattering of high-rises along Central Avenue have steadily transformed into a real-deal downtown. “We get people from the Sheraton in town for work who come in and say ‘I had no idea there was this much in downtown Phoenix,’” says Englehorn.

Interspersed between the restaurants, and the baseball and basketball stadiums, a crop of new music venues have arrived. Spots like the Crescent Ballroom and The Van Buren are supporting a burgeoning indie music scene, offering non-arena stages for local and visiting artists.

But if there is an icon for downtown Phoenix 2.0, it’s Bitter and Twisted, the expansive, stylish cocktail bar housed in Arizona’s former prohibition headquarters.

One of the world’s great cocktail bars, hidden in the Valley of the Sun

Bitter and Twisted Cocktail Parlour sits on the ground floor of the Art Deco, neoclassical Luhrs Building — one of Phoenix’s first two skyscrapers. Housed in what was once the Arizona Prohibition Headquarters, the place now slings some of the finest cocktails in the world.

Upon arrival at the bar, each guest receives a menu made to look like a storybook, illustrated with a cast of Disney-adjacent characters, just different enough to skirt potential lawsuits. Drinks are garnished with rainbow Skittles dust or grasshopper legs, paired with inventive plates from a lengthy roster of Asian-inspired eats. A waitlist is a given on weekends — but the same is true of an unexceptional Wednesday evening.

Bitter and Twisted is the sort of place that might draw a line in New York or LA. In Phoenix, it hasn’t garnered the national recognition it deserves. In spite of its threeconsecutive placements in Tales of the Cocktail’s Top Ten High Volume Bars, I’ve yet to meet a mixologist outside of Arizona territory who knows much about it.

“It’s hard to get noticed here,” said owner Ross Simon, a red-headed Scotsman. “The people who decide these things, the cocktail writers, the judges, they all want to go to New York or Miami. Nobody thinks about Phoenix having great cocktail bars.”

Drinking in Phoenix, however, is not limited to upscale cocktail havens — breweries have popped up like CVS locations. At Helio Basin Brewing, chefs use spent grain to make tortillas for the tacos found at the adjoining gastropub. Helton Brewing offers an expansive patio, ideally suited to live music. And if you’ve got a long layover at Sky Harbor, Walter Station Brewery, stationed in a defunct firehouse, sits across from the airport.

Natural landscape and an arts scene, wrapped up in one

Along with rounded pastries and outlandish dream catchers, the area has also become home to Phoenix’s art scene. And unlike in cities like Portland and San Francisco, it’s not in danger of being edged out by downtown expansion.

“The artists here, they saw what was going on when ASU came in and started buying up property,” said Mike Oleskow, curator at downtown’s art-themed Found:Re hotel. “So they bought the houses and buildings here so they’d always have this place. It won’t turn into Austin.”

While he spoke, we rounded the corner of Roosevelt Avenue and North 5th Street, where bars, and coffee houses are tucked into the rustic remains of old houses, not unlike the structures lining Austin’s Rainey Street. A woman with unkempt dreadlocks wandered aimlessly into a coffee shop, while a heavily tattooed couple argued loudly (to the point of tears), shaded by an overhanging public art project, called Shadow Play. The streets were alive before 11am, littered with pseudo-hipsters and paint-stained art kids.

Perhaps everyone was out so early to evade the afternoon heat, diffusing already into the dry air. To some, that very climate is part of the city’s charm: Phoenix has tons of accessible wilderness, with 41,000 acres of desert parks and 200 miles of hiking trails.

Those less inclined to trek up mountainous terrain can still see stunning desert scenery as they float in tube down the Salt River in Mesa. On weekends, the river transforms into a raucous floating party — while during the week, it remains a quiet, tranquil stretch for tamer floaters.

“This place has all the great nature of the West Coast, with a Midwest sensibility,” mused Matt Hook, my Arizona Outback Adventures guide, as he paddled dexterously ahead of me on the river on a serene Thursday morning. “People here, when they say they’re gonna do something, they do it. That’s why I like it better than California.”

A Midwestern culture minus the snow

Spend a night chatting up locals at a bar in Phoenix, and you’ll likely meet someone from every state in the Midwest. And as you’d expect from a group of people who migrated from icy winters to uninterrupted sunshine, they all seem genuinely ecstatic to be here. I’d seen few people quite so happy as my secondary tour guide on the Salt, a recent transplant from Buffalo, who was giddy with civic pride at the ripe hour of 5am.

Beyond the general air of positivity, Phoenix has seemingly managed to escape the big-city coastal competitiveness you might find in other major warm-weather territories like LA, Miami, or San Francisco. Phoenicians seem to be honestly invested in one another’s success. Tell that to a New Yorker.

“I don’t think people know how much we support each other,” said Lauren Bailey, a restaurateur from Ft. Wayne, Indiana, as we sat down to lunch in her bustling eatery, Windsor. “It’s a city of people who are creative and want to move the needle, to get some national recognition. In other cities they think if a new restaurant opens it means less customers for them. But here it’s yay for them, yay for me. There have never been more restaurants in this neighborhood than there are today, and we’ve never been busier.”

She explained that when her ice cream machine shorted out, a neighboring restaurant rushed in to offer support. A different restaurateur entirely has helped her insure her business when she was new to the scene. Folks were reliably kind, even if you were a competitor.

After lunch we went next door to Bailey’s adjoining ice cream parlor, Churn, where a line stretched well beyond the door frame. Despite the 90-degree heat, people queued up and chatted jovially, patiently awaiting their cones.

Well, most people. Having arrived from Miami, I was accustomed to a slightly different rhythm of life. In my experience, heat is oft-cited as a valid excuse for everything from bad driving to money laundering. So when a small collective of hungry locals ducked ahead of me in line, I called them out bitterly to the cashier.

“You can go ahead of us if you like,” a mother with two kids offered gently. “Looks like you’re in a hurry and we’re just out for a nice afternoon.”

I wasn’t in a hurry, but I ordered anyway, tactlessly skipping ahead of a teenage girl in the process.

I had been prepared for folks in this hellishly hot city to be as rude and impatient as they were in Florida, California, or Las Vegas. Instead I found a warm-weather Buffalo.

“Phoenix people, they’re not uppity at all,” said Englehorn, as we polished off our beers at twilight outside Angel’s Trumpet. As predicted, his back patio had begun to buzz with an energetic young crowd. “There’s no pretentiousness. People just want to hang out and have fun.”

Sure, he missed “the old Phoenix” — everybody misses the old somewhere. But more so, he was jazzed by the urban metropolis it was becoming — by the local beers, the cocktail bars, the restaurants, and the thriving arts scene. He ordered us another round of porters, and we sat and watched as the sky began to turn a rich, orange-flecked purple.

“We got a big sky here,” he says. “People look at it as a barren wasteland. But you’ll never see a sunset quite like you do in the desert.”