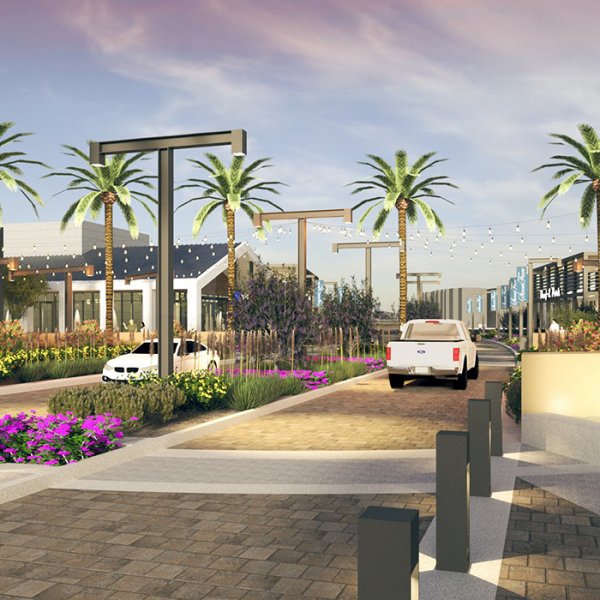 Two new sit-down restaurants have been unveiled for the planned 700,000-square- foot shopping, entertainment and dining center in Surprise, Village at Prasada, which is nearly 100% leased.

The two new restaurants, Lou Malnati’s Pizzeria and Cold Beers & Cheeseburgers, will be located within the development’s restaurant row, Street Fare at Alexandria. This will be the eighth Lou Malnati’s location in the state, which will offer Chicago-style deep dish pizzas. Cold Beers & Cheeseburgers currently has a dozen locations throughout Phoenix.

The new eateries will add to a growing list of restaurants and tenants at the new $500 million shopping center, which the developer of the project, Scottsdale-based SimonCRE, says is the largest to be developed on the West Coast in a decade. Other restaurants moving in include Barrio Queen, Firebirds Wood Fired Grill, Cooper’s Hawk Winery & Restaurant and O.H.S.O brewery.

The major power center also sits next to the new Costco store, a planned hybrid health care facility and other retail options such as Black Rock Coffee Bar adjacent to the Loop 303 and Waddell Road. American Furniture Warehouse is also making plans to build a new 200,000-square-foot retail store just north of the shopping center.

The developer of the massive West Valley project said the new restaurant hub will provide residents with indoor and outdoor eateries with walkability and an open-air retail experience.

“It is really exciting to be bringing these restaurant concepts to the West Valley, an area that is growing at an exceptional rate,” said Joshua Simon, SimonCRE’s CEO, in a statement. “Anyone that lives in Surprise knows how long they currently have to drive to visit some of these existing restaurants’ locations, so being able to give them the food that they want in a center that is more convenient for them, that’s the dream as a developer.”

Village at Prasada will also house major retailers including Sprouts Farmers Market, Hobby Lobby, TJ Maxx, Marshalls, PetSmart, Burlington Coat Factory, and Ulta. It will also feature a restaurant row and a FatCats Entertainment facility next to a planned multifamily project with more than 500 units.

The project is part of Prasada, a 3,355-acre master-planned community with residential, employment, hospitality and retail in the fast-growing city of Surprise, which has increased in population by 72% since 2004.

More information about the Street Fare at Alexandria and Village at Prasada can be found on the Village at Prasada website. Additional updates can also be found via their Instagram account @villageatprasada. Ryan Desmond, Dave Uhles, Noah Anastassatos, Neil Board and Brian Gausden with Western Retail Advisors are listed as the leasing brokers for the shopping center.

SimonCRE, which was founded 12 years ago, is a full service commercial real estate development and acquisition company. The firm has developed and leased about 3 million square feet across the country and has about 50 projects, totaling approximately $300 million in construction planned for 2022.

Originally published by The Phoenix Business Journal on August 16, 2022.

SimonCRE, a national commercial real estate development and acquisition firm, has released that it has signed two more restaurants, Lou Malnati’s and Cold Beers & Cheeseburgers, to be added to the Street Fare at Alexandria. Located in the upcoming retail center Village at Prasada in Surprise, this restaurant hub is centrally located to provide Surprise residents with indoor and outdoor eating opportunities with immense walkability, offering the open-air retail experience that many shoppers want today.

This will mark the 8th location for Lou Malnati’s in the state, bringing their Chicago-style deep dish pizzas to the Chicago transplants and Arizona natives that live throughout the West Valley. Cold Beers and Cheeseburgers currently has 12 immensely popular locations throughout Phoenix, and now brings their classic neighborhood burger joint aesthetic to the residents of Surprise, and Village at Prasada. These strongly desired restaurants join an already robust row of restaurants that includes OHSO Brewery, Barrio Queen, Firebirds, and Cooper’s Hawk. Surprise and West Valley residents have expressed an interest in more food options that are upscale, while still retaining a casual atmosphere. These restaurants will provide residents and shoppers with a welcoming location to meet with family and friends.

Developed with the residents of Surprise in mind, the Street Fare at Alexandria brings a variety of desirable food options that would otherwise require travel across the Valley for residents to access. Residents have previously indicated a desire for more variety in restaurant options for the West Valley, and SimonCRE worked hard in the process of developing Street Fare at Alexandria to deliver this dream.

“It is really exciting to be bringing these restaurant concepts to the West Valley, an area that is growing at an exceptional rate. Anyone that lives in Surprise knows how long they currently have to drive to visit some of these existing restaurants’ locations, so being able to give them the food that they want in a center that is more convenient for them, that’s the dream as a developer” said Joshua Simon, SimonCRE’s Founder and CEO.